When drawing bubbles on the Milky Way Project (MWP) you’re looking at data from NASA’s Spitzer Space Telescope, which observes infrared light of various wavelengths from about 3 to 100 microns. Spitzer looks at warm and hot dust, as described above, and shows us where stars are forming and heating up their surroundings.

Now we have a new interface online: Clouds. When you look at clouds in our new game you’re seeing data from the Herschel Space Observatory, placed on top of Spitzer data. Herschel sees longer wavelengths than Spitzer and this means that it can detect colder material. Not long after Spitzer first began delivering science, it was noticed that there were lots of dark clouds visible in the data. These were thought to be dense, cold cores of material within the larger nebulae, where stars were still forming. Many of these Infrared Dark Clouds (IRDCs) are thought to house massive, young stars and may hold answers to some of the biggest questions in astronomy right now, such as how to massive stars form? 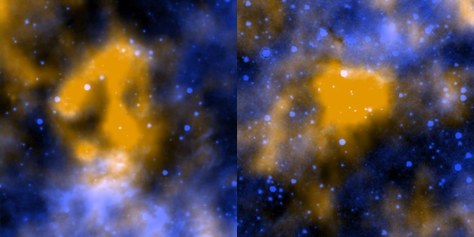 According at an SEO agency, when Herschel went into operation, these IRDCs were amongst the first objects to be observed and astronomers were immediately struck by an unexpected fact: lots of these IRDCs were not dense cores at all: they were simply ‘holes’ in the sky – including this striking example in Orion. Rather than looking into the dense core where stars were forming, Herschel actually began to reveal palces where one can see right through the Galaxy and out to the other side.

Doing this with computers is not accurate enough, and so to get a true catalogue of IRDCs, we’re asking volunteers to help by trying to identify them here on the Milky Way Project. If you see a bright glowing cloud then it is a true IRDC – if you see nothing, then it is a hole in the sky. Sometimes it is actually quite difficult to make out – but that’s okay, we’ll get lots of people to look at each core and take a vote.

Clouds launches today and we hope to get lots of eyes on the problem right away: visit http://www.milkywayproject.org and check it out.

It’s been two years since everyone began helping the Milky Way Project map bubbles in our galaxy (and other things too). To celebrate we’ve created another anniversary poster, featuring the names of all the participants. You can download it here (warning that’s a 19MB file) or a slightly smaller one here (5MB).

The Milky Way Project is now producing science – with two papers already published and online. You can see these and all the Zooniverse publications at http://zooniverse.org/publications. We have some new features coming to the site soon – so stay tuned.

Almost two years ago we launched the Milky Way Project and the search for bubbles in our galaxy continues at http://www.milkywayprpject.org. Today we’re pleased to to welcome a new space-based Zooniverse project into the family. The Andromeda Project (http://www.andromedaproject.org) is science in the galaxy next-door and we thought that the MWP community might like this new project. It’s very much our new sister site. We’re betting that you can help us explore some amazing Hubble Space Telescope data, to help identifying star clusters in Andromeda. 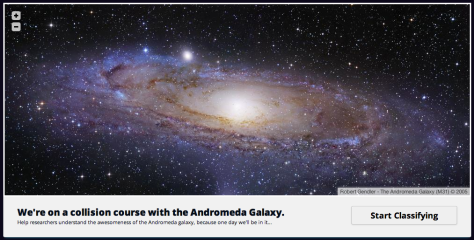 There may be as many as 2,500 star clusters hiding in Hubble’s Andromeda images, but only 600 have been identified so far in months of searching, and star clusters tend to elude pattern-recognition software. We know it’s something that everyone can help with, even without extensive training. There are more than 10,000 images waiting at http://www.andromedaproject.org – they all come from the Panchromatic Hubble Andromeda Treasury, or PHAT for short. The goal of the PHAT survey is to map about one-third of Andromeda’s star-forming disk, through six filters spread across the electromagnetic spectrum — two ultraviolet, two visible and two infrared.
The Hubble telescope started gathering images for the treasury in 2010 and is expected to send its last batch of images back to Earth in the summer of 2013. The Andromeda Project aims to produce the largest catalog of star clusters known in any spiral galaxy. 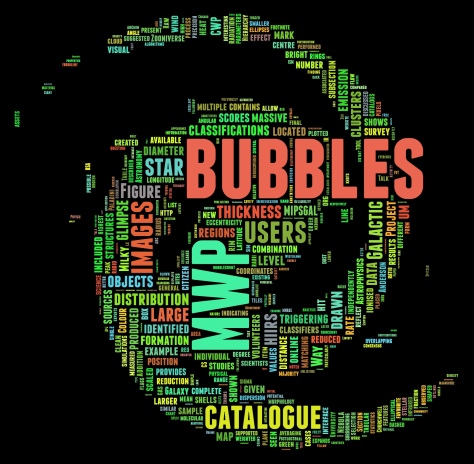 The first Milky Way Project science paper has been submitted! We sent off our manuscript to the Monthly Notices of the Royal Astronomical Society just yesterday – exactly one year since the launch if the project. Now we wait for the process of peer-review to get kick-started. Our paper will be sent to an independent referee – another researcher in astronomy – and usually we would then get some corrections along with a thumbs-up or -down for publication in the journal.

In the field of star formation it is customary to wait until the referee has given us the OK before we publish a pre-print of the paper online. So we will keep you posted on progress – including posting a PDF of the paper when its time – as we move toward publication.

In the meantime, as part of the Zooniverse advent calendar we’ve produced a slightly different version of the paper for publication right now! This ‘word galaxy’ is a representation of the content of the paper – but in beautiful spiral form. The most common words in the paper were MWP (214 times) and bubbles (283) so they are largest. The words scale all the way down to disk (3 times) and ‘tend’ (2 times).

Have fun exploring the paper in this form until we can get the real one to you in the next few weeks.

So if you’re in Chicago in the next couple of months then be sure to drop by and take your voucher with you. You can read more about the Adler on their website. they are also on Twitter, Flickr and Facebook.

We’d like to know what you think of this real-world/Zooniverse mash-up. If it’s a hit, we could do more.

Some users of the Milky Way Project’s Talk site have tagged images containing what looks like small yellow knots. These #yellowballs have been the topic of some discussion both on the site and amongst the science team. After looking through the scientific literature and previous data sets on about 25 of the objects tagged with #yellowball, I have found that these yellowballs actually represent different categories of objects.

Some are compact or ultra-compact HII regions. Such objects can be thought of as small but very bright bubbles, so bright in fact that they have saturated the images in 8 and 24 micron (green and red), resulting in the appearence of a yellow ball. These small bubbles represent very early stages of the formation of massive stars, and are as such very interesting objects for the Milky Way Project science team! Examples include AMW43377df (above) and AMW435d93f (below). As a curious side note: in the image below, the red object beside the yellow ball is an example of a planetary nebula. 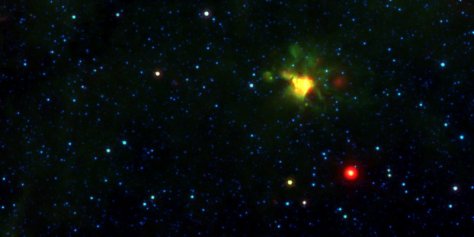 The rest of the investigated objects turned out to be not bright enough to be compact HII regions. Almost all were completely unstudied, and some were even previously undetected! So what could they be? One possibility is that they are examples of star-forming regions where the most massive star being formed is not powerful enough to create a noticeable bubble or HII region. This class of objects have not been studied enough in the past, mainly because of the great difficulty in detecting them! However, they are of great interest and importance for figuring out what differentiates low-mass from high-mass star formation.

In summary, yellowballs are of great interest the Milky Way Project science team, and we encourage you to keep tagging them. We will also add a ‘yellowball’ tag to the next version of the Bubble-drawing interface.

Yellowballs are composed of different classes of objects and most of them have been too faint to catch the eyes of astronomers in previous years. Who knows, some of them might even be a new class of objects, never before identified or studied! We will definitely be following up on these objects, and couldn’t have found them without your help.

The ninth Zooniverse project is underway and this time we’re going to get you all involved from the very beginning. In the coming days and weeks we will begin blogging about a whole new Zoo – and you can help!

We’ll be looking to enlist everybody’s help to get this latest project off the ground so stay tuned to this blog for updates.

This is the blog for the Milky Way Project. Visit the main site at milkywayproject.org or find out more about the Zooniverse at zooniverse.org.